Note from the author

This post was a standalone Namesdao only post. Then it was a Runtime Rambling headline post. Then I went down a research rabbit hole that made it evolve into a Namesdao/Crypto Name Service post.

I test in prod and write on the go. Deal with it.

As most of the Chia Twitter community is aware, Namesdao has launched their Chia Name Service, where farmers are able to spend a small amount of AIR, or SBX, or XCH to register Namesdao ".xch" names (example: _XCHcentral.xch), which are minted to an NFT on the Chia blockchain.

Then using their open source python script, you're able to send a transaction to another user using one of their .xch addresses, rather than needing the other party to provide you with a full XCH address.

The project is being led by @BenAtreidesVing and @RightSexyOrc. Relevant links to the project where you can find out more information: Twitter, Website

To learn how to register yourself a single-underscore address, check out Ben's Twitter thread here:

Rather than drill down into the project too hard this close to launch, I instead just took a little time to ask @RightSexyOrc some initial questions so I could get a better feel of where he and @BenAtreidesVing envision the project going.

I think the biggest question I have is… why the attachment to the .xch name? The service can function using basically any extension it wants... or no extension at all. I understand it from a marketing perspective, but as far as I know, there’s 1 or 2 other projects doing something similar who intend to also issue ".xch" names.

The analogy is to ENS on the Ethereum chain with .eth, and that has been carried across to other chains, e.g. .sol on Solana.
We are the leader, live and welcoming to the full Chia community and new people getting start with Chia. More than 1,000 Namesdao .xch names have been registered. You can register in any of 3 ways, including an extremely user-friendly dapp for browser extension wallets. We feature a free tier too, so that anyone can have an .xch name with just a few mojos they might get from a faucet in a new wallet.

Seems like initially you guys were pretty anti-web address, but then added the feature anyways. More plans for web features?

It was not our focus. We did a multi-stage rollout to be able to get feedback from the community. We did get many questions plus interest in domain name capabilities. We did some testing initially with DNS CNAME records. We look to offer DNS IP # lookup support or similar in the future. The webpage is to give a preview, an instant home page, and a way to be able to receive NFTs and payments easily.

Also interesting with expiration / ongoing fee. Why not just a one time registration like some other services?

Here the pattern is ENS in Ethereum. While one-time reg seems nice, one can end up with a huge inventory of dead, dormant names, which perhaps is not ideal for the community. Additionally, annual renewal can permit lower annual costs than one-time reg, plus an ongoing budget to support further development, non-IPFS hosting, and the free name registration tier.

Anything else you want to add / think people should know about the project?

You could imagine holding your Namesdao .xch name in a multi-sig, time-limited, social-recovery wallet if you'd like, which could limit certain risks. You can sell your .xch address using a regular offer. You can even buy one right now, several are for sale on Dexie

Oh, and per https://www.namesdao.org/about.html , "We help out! 5% of all initial registration fees received will go to a charity DAO to be set up supporting education, open source and freedom-oriented initiatives. We thank all of the community members who've helped us along the way. "

Anything else going on in Orc Nation?

Right now we are focused on Namesdao. We'd like to use our Time Machine dapp, for time-locked token issuance, with Namesdao compensation of team members, so we look forward to finishing that up at some point. Time Machine is designed to help align incentives for ongoing and long-term value creation and collaboration.

As we've seen on other chains, there's no doubt that a name service like Namesdao will eventually be a vital service/tool for the Chia ecosystem.

While writing this post I went down a bit of a research rabbit hole on Crypto Name Services ("CNS") available on other chains like ENS for ETH, and Bonafida's Naming Service for SOL. I definitely want to find some time to digest what's going on with other established chains.[1]

Also, there are a few other CNS projects I'm aware of building for Chia including Go4.me and ChiaNameService that I'll be interested to experiment with when they're up and running.
(I feel like I've seen at least one other service on Twitter, please let me know if I'm missing anyone and I'll add them here)

Who moves first
For most users, we're currently in a chicken or the egg dilema for name services. To have it's full utility, the name service needs to be integrated across the ecosystem (or at least into a major wallet or two). Until then, the service will likely remain a cool proof of concept.[2] 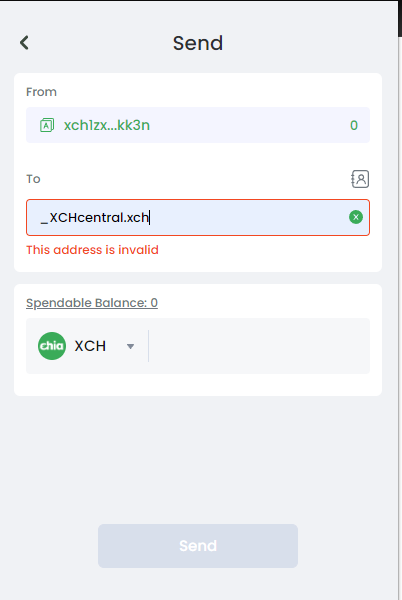 However, in order for wallet devs to spend time integrating a name service, they're likely going to want to see a decent userbase / potentially be compensated for their dev time.

To encourage these integrations to happen, the Namesdao team is offering bounties of their NAME tokens over on their website's about page found here.

Update - The chicken fires first!
While writing this post has taken far too long... the Namesdao team has just about shipped a new feature! Currently, they're working on a fork of the official Chia GUI that implements Namesdao addresses to be used in the send bar! Whether this will use on-chain lookup, or if it will be using Namesdao's cached lookup remains to be seen.

Could this new detail help other projects?

TLD Fights
Fights over Top Level Domains are just starting. Unstoppable Domains is fighting Handshake and is soon going to be fighting against ICANN, if they aren't already. Things are going to get weird.

You send a payment to Alice.xch, which can go to one of three places depending on which wallet you're using and which name service(s) they have implemented. Ugh. Best case, you select which name service to resolve with through from a dropdown and save that contact to an address book in your wallet? Still ugh. Overall, the ecosystem is gonna resolve the issue one way or another, unless competitors are scared off by Namesdao's first mover advantage on .xch.

Note - Go4.me has avoided this issue (and potentially a few others) through the use of Twitter to register accounts (big help in avoiding name confusion) and almost certainly ensures it avoids name collisions (highly doubt anyone would be silly enough to try and start a competing service using Go4.me's name convention, and it's even more doubtful that legitimate wallets would be silly enough to implement said imposter... But for now, Go4.me is basically a glorified address book (honestly, which I do find useful given the names correspond to Twitter handles). I'm sure Josh will be adding new features soon. He has been a little pre-occupied with creating SeedSnapp (you should check it out, and I'll almost certainly be writing about it)

Name Confusion within Namesdao
Depending on how the Namesdao team implements its planned support of zero, single, double, and triple underscore names... There is quite a bit of concern for Namesdao to cause name confusion with itself.

I know the Namesdao team is moving quickly, and we're early on the product, but felt it was neccessary to raise the issue for this article as I believe its already possible to have this type of name confusion with some ___ and _ names that have been made available.

I'm sure we'll have a follow up on this issue the next time I write about Namesdao as I didn't pressure Orc for an answer on this issue during this initial Q&A... And I've gone a little off the rails with this post from its initial short and sweet Q&A intentions.

Overall, the work being done by Namesdao deserves your attention and I applaud the time and dedication that Orc and Ben have committed to the project.

If you feel like supporting XCHcentral's writing like this, donations of XCH/NFTs can be sent to: xch1dwm59nranz0khzfzmv0j9g4tpwe4fx7ven0ptr9hufs2c0kgesxq8r7mws

Or I guess I should be saying you can send them to _XCHcentral.xch as well!