Last week, Chia Network released a blog post detailing a basic financial model developed by Gene Hoffman (Chia Network, President & COO) and Misha Graboi (Chia Network, CFO) that can be used to derive a valuation of a blockchain, and by extension, a valuation for the present value of that blockchain's coins.

Ok... just to start off... None of this is financial advice. The information provided on this site is for informational and entertainment purposes only. If you require financial advice, please seek out a certified financial planner, or other dedicated professional to help you.  Now that we have that covered, let's get into it!

About Financial Models & Projections in General

So, I think it's important to understand that no projections model is perfectly accurate – especially one about an emerging industry that's looking 10 years into the future. Additionally, valuations can vary drastically based on assumptions that are made off of the same access to information.

We have a ton of examples of this in the traditional equities market. Even for a simple & stable [1] business model such as Proctor & Gamble, "expert" analyst estimates of share price can vary wildly. 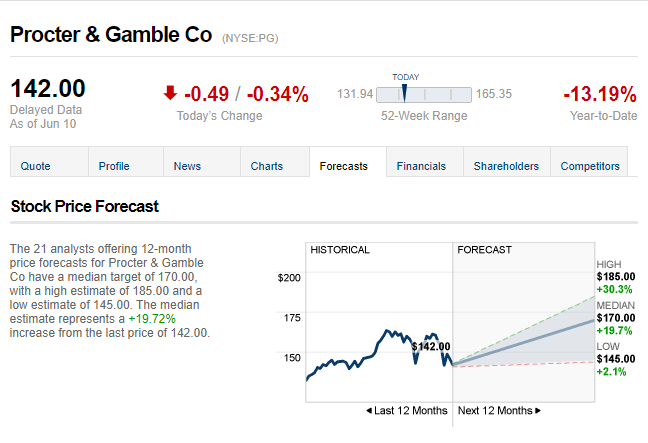 Yes, there are 21 analysts, each with their own valuation models, trying to predict the fair market value of P&G shares with a total range of $40 (27.5%) between the highest and lowest estimates.

Again, these are "experts" who's sole job is to come up with a proper valuation for this giant Company with a long history and well established business model... and they're only trying to predict the share price within the next 12 months.[2]

The range in analyst share price predictions only gets wider as a Company's business model and product offering gets more complicated. Take a look at the analyst price forecasts for Nvidia. 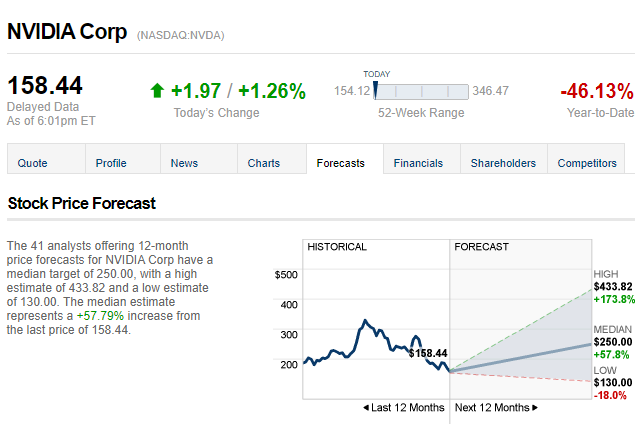 No matter where Nvidia's share price goes within the next 12 months, at least some of these analysts are going to be horribly wrong.

The model released by Chia Network is looking to develop a price for XCH 10 years from now.

So now you're probably wondering... "well, if you're telling me that professionals struggle to predict equity prices of established businesses one year in the future, what's the point of trying to predict the market value of a blockchain 10 years in the future?"

And to that I say... great question reader!

So, what's the point?

I do not view the point of the release of this model as "come up with the most accurate price down to the penny for XCH 10 years in the future".

Instead, I believe it's to really hammer home this one concept from the blog post that accompanied the release of the model -

In a mature, well-architected chain, the presence of transaction fees and the fact that coins are the only ‘tickets’ tradable for fiat that allow access to transaction blocks means that there is a minimum coin value connected – not to speculation that somehow the blockchain’s coin will be adopted as a quasi-fiat currency, but to actual economic value generated by the demand to secure and transact on chain.[3]

Compare this to a recent interview with Bloomberg where Sam Bankman-Fried (Founder and CEO of cryptocurrency exchange FTX) describes how the market has been deriving "valuations" for Yield Farming protocols.

And now all of a sudden everyone's like, wow, people just decide to put $200 million in the box. This is a pretty cool box, right? Like this is a valuable box as demonstrated by all the money that people have apparently decided should be in the box. And who are we to say that they're wrong about that? Like, you know, this is, I mean boxes can be great. Look, I love boxes as much as the next guy. And so what happens now? All of a sudden people are kind of recalibrating like, well, $20 million, that's it? Like that market cap for this box? And it's been like 48 hours and it already is $200 million, including from like sophisticated players in it. They're like, come on, that's too low. And they look at these ratios, TVL, total value locked in the box, you know, as a ratio to market cap of the box’s token.[4]

The difference is night and day.

Fundamental economic value based on the value of securing blockspace to transact on a secure L1 VS this box probably has value because other people have put their money in the box and locked it up.

Or said differently,
Fundamental value VS wild speculation & fear of missing out

The release of Chia Network's Blockchain Valuation Model serves as a starting point for the conversation of what the fundamental economic value of an L1 blockchain is. And that... is the point.

Throughout the following weeks[5] I'll probably have a few follow up posts that pick and prod at the model and spur some additional discussion around the assumptions used in the Management Case. I've been playing with an excel version of the model that I'm expanding on a bit, but it's not ready for public consumption yet.

If you have comments on the Blockchain Valuation Model, or another Chia/blockchain/NFT related topic, let me know! @xchcentral_jm

I have long positions in XCH, both from farming XCH as well as from purchases of XCH on a variety of secondary markets.

If you feel like supporting our projects & writing like this, donations of XCH / CATs can be sent to: xch1dwm59nranz0khzfzmv0j9g4tpwe4fx7ven0ptr9hufs2c0kgesxq8r7mws 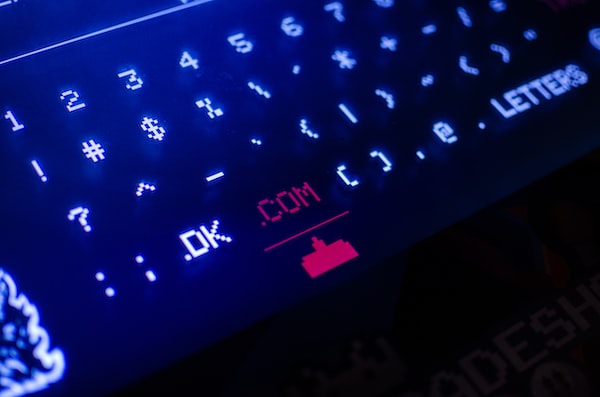